Syed Kamall on the Paris attacks: You can attack us. You can injure us. But you will never break us. 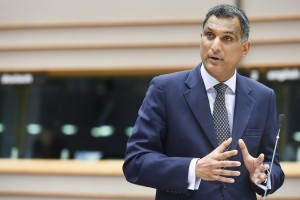 This morning the European Parliament held a debate on the 13th November attacks in Paris.

This morning the European Parliament held a debate on the 13th November attacks in Paris.

On Friday 13th November I was with other Conservatives and Reformists in Tunisia where we were taking part in a conference on building a Muslim democratic movement. We knew then as we saw the pictures coming in from Paris, as we shared the grief for the people of France and Paris, that it could happen again in Tunisia. Sadly that is what came to pass overnight so our solidarity should not only be with the people of France, but it should be with the people of Tunisia and all the victims of terrorism and Daesh.

One of the terrorists involved in the Paris attacks spent his night drinking alcohol and smoking cannabis, another never went to the mosque.Two British terrorists ordered a book before they fled the UK for Syria last year. The name of that book? Islam for dummies.

Yet all these terrorists claim to be carrying out these acts in the name of Islam. Prepared to slaughter innocent people on a Friday night in Paris Eating dinner Watching a rock band going about their own business. It could have been in any of our cities. It could have been aimed at any of us.

But sadly, there is method to their madness. Firstly, they hope to inspire copycat attacks and recruit more terrorists.Fortunately, the vast majority of Muslims will not fall for this.Secondly, even though most victims of Daesh attacks are in fact Muslims, through these attacks in our cities they want to provoke a backlash, to convince Muslims that Islam is despised in the west.

We all need to come together, to show them they will not succeeded.

In the aftermath of the attack, there have been the inevitable statements about the incompatibility between Islam and western democracy. We may even hear some of that today in this chamber.

But let us be inspired by the words of Antoine Leiris who lost his wife Helene in the Bataclan. He told the terrorists, “I will not give you the gift of hating you.” How brave he must have been to write those words, to people who had just murdered his wife, to people who had shattered his life.

To people with a love for death, who attacked a city known for its love of life.

It is at times like these when our humanity must become stronger and not descend into a spiral of hatred and blame. We need to come together to learn the lessons, to strengthen our resolve, to develop our response.

A response that must be measured and proportionate. For if every time they attack us we erode our freedoms, there may eventually be no freedoms to defend And the balance between security and liberty will always be hotly debated. But we should debate this delicate balance without accusations, without any of the insults I see flying across this chamber, without questioning political opponents’ determination to fight terrorism.

Because this whole house needs to come together to agree on clear and tangible measures, to strengthen our protections Such as the Passenger Name Records system by the end of the year. The ECR rapporteur Timothy Kirkhope will deliver this working with the other groups but also addressing concerns over civil liberties.

Such as better sharing of intelligence between national authorities.This does not mean that we need an EU intelligence agency – the answer is not always more Europe, the answer is to build trust between agencies of the nation states to make sure they share the intelligence they have.

But we shouldn’t pretend that every terrorist crosses borders to come into the EU. Many sadly were born and radicalised in EU member states, some searching for an identity or sense of belonging, others radicalised in prisons, some violent individuals looking for a new cause,others vulnerable & fooled into believing there is a violent shortcut to paradise in a world of temptation.

But better integration must be part of the solution.
For where there are young people who feel they do not belong to the country in which they live, where they are ghettoized, IS & Daesh sees them as potential recruits.

We will not surrender to hatred

We will not surrender to intolerance

We will not surrender our freedoms.

You can attack us.

You can injure us.

But you will never break us.”