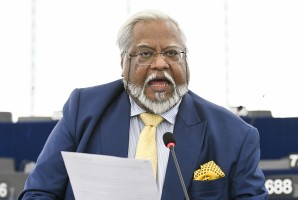 A conference of donor nations and charities in Brussels today aims to mobilise and coordinate support for strife-torn Mali.

A conference of donor nations and charities in Brussels today aims to mobilise and coordinate support for strife-torn Mali.

The conference has brought together some 100 government representatives and aid officials and is led by Jose Manuel Barroso, the President of the European Commission, French President Francois Hollande and Mali’s interim President Dioncounda Traore. It aims to galvanise the international community to raise €1.9 billion, but that is only half of what Mali’s transitional government says it needs to finance a two-year development plan.

The situation in Mali and its surrounding region remains tense since sectarian violence broke out in early 2012. The French-led intervention in January stalled advances by rebels and Islamic militants, however security and development in the region still remains in crisis.

Nirj Deva, Conservative MEP for the South East of England and Conservative spokesperson on international development stated: “Mali is at the centre of a security and development crisis. The coup d’état which took place in March 2012 has created major instability for the country and the region. I support and welcome today’s donor conference, but the conflict is far from over yet and much more needs to be done to restore a long term sense of stability.

“We must focus not only on donating money but on the actual issues which have affected the country during this difficult time. Firstly we must concentrate on the continuation of military intervention in order to stop terrorists from gaining strength and taking over the country. Stopping them is an imperative as their success would turn Mali into an Islamist state which would pose a regional threat to Africa, to Europe and to the rest of the world.

“More than 100,000 people from northern Mali are displaced within the country or have left to neighbouring countries as refugees. We must address the refugee crisis by providing these people with assistance and support.

“After the fighting is over, we must help Mali restore stability by aiding the country in terms of rebuilding its democratic structures and promoting economic development. We must be careful with our approach and work towards actual solutions; just by donating a horrendous sum of money we will not create peace or stability.”

We need to target the genuine needs of those with disabilities, and ensure that they're included in society. As hu… twitter.com/i/web/status/1…

This Corporate #DueDiligence and Corporate Accountability directive lacks common sense. The consequence will be tha… twitter.com/i/web/status/1…

There must be mandatory rules to enforce corporate #DueDiligence. However, we mustn't turn our multinationals into… twitter.com/i/web/status/1…

An ambitious climate policy is something we're in favour of, but we must also protect the competitiveness of our bu… twitter.com/i/web/status/1…

When considering our climate objectives, we mustn't forget the competitiveness of our companies, especially during… twitter.com/i/web/status/1…

⏩ What's our ambition for the #FutureofEurope? 👉 A community of sovereign European states – a Europe of mutual resp… twitter.com/i/web/status/1…

As the #CoFoE edges closer to becoming reality, we look forward to seeing open & constructive debate, where differe… twitter.com/i/web/status/1…

@RenewEurope Let's make this #CoFoE an open, fair, and constructive debate; one in which all voices can be heard. @Reset_EU_ECR