Kamall to the new president of the European Commission 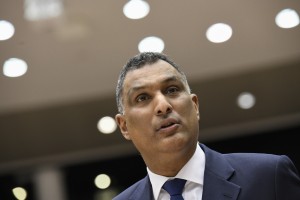 Kamall to Juncker: "Do you want your commission to be the last of an old era, or the first of a new era?"

Where Jean-Claude Juncker proposes a forward looking agenda of leadership for a new era, the ECR will support him. However, when he looks backwards towards a more centralised European superstate we will propose a positive alternative, Syed Kamall, European Conservatives and Reformists Group leader, said in today’s speech ahead of Mr Juncker’s confirmation vote in the European Parliament.

Speaking in the chamber, Mr Kamall said that the ECR cannot support Mr Juncker for two reasons: namely the process that brought him to being nominated by the council (which has led to the ‘mother of all backroom deals’), and the fear that he is not the right man to lead an agenda of reform.

“If you put forward an agenda that opens markets, tears down barriers and decentralises power, then we will stand with you. But if you espouse an old, tired, backward-looking agenda, we will offer a positive, constructive alternative.

“Many of us are looking for you to clarify your position Mr Juncker. In last week’s hearings with political groups on issues such as Euro federalism, maternity leave and budgetary rigour you told the ECR one thing and seemed to tell the other Groups another. We need the real Mr Juncker to stand up and tell us all what he really believes.

“But in reality, you know and we know that none of this matters. The deal has been done. The spoils have been shared out. The election that was supposed to end all back-room deals has resulted in the mother of all backroom deals. You know and we know that you are likely to be the next President of the Commission and Mr Juncker we wish you well. But members of my political group will not be able to vote for you today for two reasons: Firstly, we do not subscribe to the process that brought you here, we do not believe you have an EU-wide mandate that stretches across all 28 member states. And secondly, members of my group are not yet convinced that you are the right man to lead the charge for European reform. I hope that over the next few years you prove us wrong.

“The question that I would put to you is this: do you want your commission to be the last of an old era, or the first of a new? This is the crux of the leadership we would like to see: not ‘more Europe’ or no Europe, but a better Europe.

“We need leadership to reform the budget for a new era. Moving away from the idea that a bigger budget means a better budget. Instead, let us have a better budget to facilitate investment, infrastructure, technology and research. Let our children inherit a vibrant economy built for their future. They must not inherit large debts to pay for our past. Instead of focusing on how to raise more money from own resources – let us lead the debate towards how we spend taxpayers money better. That’s why my group would like to see a dedicated commissioner for budgetary control.

“We need leadership to build a single market fit for the new era. Yet eight years on from the Services Directive a single market in services is still far from a reality. Why don’t we sit down with digital entrepreneurs and ask them about the barriers they face and then let’s tear them down. It’s time we delivered a digital single market for all. Let us look at the energy market and identify and remove blockages, create incentives for consumers to promote energy efficiency and ensure investment in energy security. New energy sources and more interconnectors to reduce our dependence on regimes in the Middle East and Russia.

“We need leadership to deliver more trade and an international development policy fit for a new era. More open and transparent trade agreements with fast-growing economies. International development programmes to promote property rights, legal and financial systems. Support for entrepreneurs in poorer countries to create wealth and jobs for local peoples in their countries. We need leadership to promote better regulations that are fit for a new era. We should talk to businesses of all sizes – directly – and ask them what stops them from creating extra jobs and growth.

“We need leadership to address the underlying weaknesses in the eurozone: the significant productivity gaps that are inflicting job losses and crippling levels of youth unemployment in southern Europe. With the euro many member states have lost the instrument of exchange rates to address these problems. As a result we have seen burdens passed from banks to taxpayers, treaties broken, and untold state intervention.

“We need leadership on immigration to restore people’s faith in both the principle of free movement of those workers who wish to work and contribute to their new host countries but also in controlled migration that respects the rights of all member states – both those welcoming new workers but also those who are losing their youngest and brightest to other countries.

“Mr Juncker, I have today outlined a few examples of where leadership is needed to build an EU fit for a new era, for the century ahead of us, not the century behind us. Leadership to address the fears and suspicions of our voters towards the EU’s direction. Leadership that seeks to fulfil people’s hopes and aspirations for the future.

“Mr Juncker, members of my group do not feel able to vote for you today. But where you put forward an agenda that leads the EU towards the future, to the challenges of a new era, then you can look to us for support.”

@EP_President Have a speedy recovery 👍