Roberts Zile: Railway liberalization is beneficial both to consumers and professionals 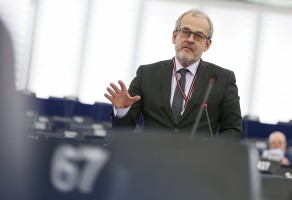 “It is important that the 4th Railway Package, as offered by the European Commission, is not rendered ineffective due to the pressure of various interest groups,” remarked Roberts Zile.

“It is important that the 4th Railway Package, as offered by the European Commission, is not rendered ineffective due to the pressure of various interest groups,” remarked Roberts Zile, ECR spokesman in the European Parliament Transport and Tourism committee, commenting on yesterday’s public hearing on the progress of the Single European Railway area and the opening of domestic passenger rail markets.

According to Zile, the large railway companies and the trade unions both presented a variety of counter-arguments for further rail market liberalization in the EU during the debate in the hearing, which indicates an incomplete understanding of the European Commission’s proposal.

“The largest resistance to liberalization of railways came from the Ms Sabine Trier, representative of the European Transport Workers’ Federation. According to her, it is important to maintain the fragmentation of the railway market along individual Member States in order to maintain the workers’ living standard. However, it has to be understood that, if the railway industry is not reformed to make it more competitive with other transport modes, the share of rail transport services will decrease, and the workers will suffer as a result. Moreover, at the moment engine-drivers cannot apply for jobs outside their country due to the closed markets. In many cases this leads to missed opportunities to improve their living standard and increase their wages.”

However, Zile also expressed hope that the 4th Railway Package will successfully endure the upcoming legislative process through the European Parliament and the Council, and will in the future significantly contribute to the EU economy.

“It is absolutely clear that without creating real competition in the railway sector, the EU rail transport market will slowly decline. According to statistics, the modal share of passenger rail in intra-EU transport has on average remained more or less constant since 2000, at around 6%, whereas the modal share of rail freight has decreased from 11.5% to 10.2%. At the same time, for example, domestic rail market liberalization could produce more than €40 billion of financial benefits for citizens and companies involved by 2035 and would allow provision of up to 16 billion additional passenger-kilometres.”

At the beginning of this year, the European Commission announced long-awaited proposals for the 4th Railway Package. The proposals aim to eliminate the existing technical and administrative barriers, as well as other factors hampering competition, which preclude the restructuring of the railway sector and improvements of rail service quality and efficiency.

We encourage working together to fight tax fraud and evasion, as long as there is no unnecessary bureaucracy for bu… twitter.com/i/web/status/1…